What Are Modal Verbs? 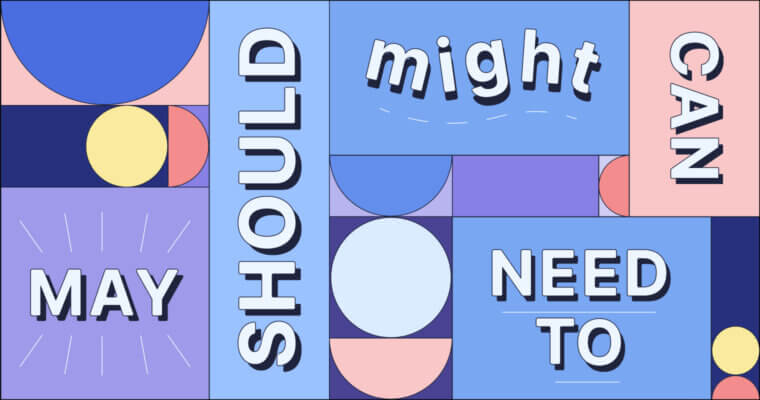 Modal verbs show possibility, intent, ability, or necessity. Because they’re a type of auxiliary verb (helper verb), they’re used together with the main verb of the sentence. Common examples include can, should, and must.

Modal verbs can be tricky, especially when it comes to using them in a sentence. The good news is that they’re simple once you learn how they work. Below, we explain everything you need to know to use modal verbs with ease.

What are modal verbs?

Modal verbs are used to express certain hypothetical conditions, such as advice, capability, or requests (there’s a full list in the next section). They’re used alongside a main verb to change its meaning slightly. Because they’re auxiliary verbs, they can’t necessarily be used on their own. (A modal verb should only appear alone if it’s clear from context what the main verb is.)

Consider the difference between these two examples:

I swim every Tuesday.

I can swim every Tuesday.

The first example is a simple factual statement. The speaker participates in a swimming activity every week on Tuesdays.

The second example uses the modal verb can. Notice how the meaning changes slightly. The speaker does not swim every Tuesday; they’re saying they are capable of swimming every Tuesday if they need to. It’s hypothetical.

Modal verbs are quite common in English, and you’ve probably seen them hundreds of times without actually knowing their name. The most frequently used ones are:

There are more modal verbs, although the ones above are the most common. Some modal verbs are outdated and rarely used—like shall and ought to—while others are more colloquial—such as got to, need to, or have to. Some express very specific conditions that don’t come up often, like dare, for example, “I dare say.” The phrase used to, as in “I used to be an English student, too,” also behaves like a modal verb.

When are modal verbs used?

What special conditions do modal verbs show? Here’s a list of when to use modal verbs, along with examples:

Some things seem likely, but we don’t know for sure. In these cases, you can use the modal verbs should and must to show probability without certainty.

Her parents must be so proud.

My baby brother should be asleep by now.

In situations when something is possible but not certain, use the modal verbs could, may, or might.

She may become the youngest pro soccer player ever.

She can speak three languages, but none of them well.

You can lead a horse to water, but you can’t make it drink.

If you want to ask permission to do something, start your question with can, may, or could. Traditionally, in more formal and polite usage, may is better for permission; if you ask “can I go to the bathroom?” it could be misinterpreted as, “do I have the ability to go to the bathroom?” (However, in modern usage may and can are both perfectly acceptable options when describing possibility or permission.)

May I leave early today?

Could I play too?

Similarly, if you want to ask someone else to do something, start your question with will, would, can, or could.

Would you get that box off the top shelf?

Will you turn that music down?

What if you want to recommend something, but not command it? If you’re giving suggestions or advice without ordering someone around, you can use the modal verb should.

You should try the lasagna.

That guy should wear less cologne.

On the other hand, if you want to command someone, use the modal verbs must, have to, or need to.

You must wash your hands before cooking.

Modal verbs can express a necessary action, such as an obligation, duty, or requirement. Likewise, the negative form expresses that an action is not necessary. Use the same modal verbs as with commands: must, have to, or need to.

We have to wait for our boss to arrive before we open.

You don’t need to come if you don’t want to.

To show an ongoing or habitual action—something the subject does regularly—you can use the modal verb would for the past tense and will for the present and future. The phrase used to is also acceptable if you’re talking about a habit that no longer exists.

When I lived alone, I would fall asleep with music.

I will arrive early and leave late to every meeting.

How to use modal verbs (with examples)

So, if you want to brag about your ability to eat an entire pizza, you take the infinitive form of “eat” without “to”—which is simply “eat”—and add the modal verb “can” in front of it. The rest of the sentence continues as normal.

I can eat an entire pizza.

For questions, you still use the infinitive form of the main verb, but the order is a little different:

So let’s rephrase the example above as a question:

Can you eat an entire pizza?

Because modal verbs largely deal with general situations or hypotheticals that haven’t actually happened, most of them are in the present tenses. However, some of them can be used in different verb tenses, so let’s talk a little about how to construct them.

We already covered the simple present above, but you can also use modal verbs in the present continuous and present perfect continuous tenses.

After the modal verb, use the word be followed by the –ing form of the main verb.

I should be going.

You can add a modal verb before a verb in the present perfect continuous tense without changing much. However, when using a modal verb, you must always use “have,” never “had,” even if the subject is third-person.

She must have been sleeping.

Past tenses and present perfect

Putting a modal verb in the simple past, past continuous, and present perfect tenses is a little trickier.

For starters, two modal verbs in particular have a simple past tense: can and will. If you want to use either of those in any of the past tenses, you must first conjugate them into their past-tense form:

All the others remain the same, although some can’t be used in the past at all. Modal verbs often deal with hypotheticals, but if an action already happened in the past, it can’t be hypothetical. These are mostly for speculating about the past, such as wondering “what if . . .”

Of the main modal verbs listed at the top, only can and will can be used in the simple past. Have to and need to can also be used, as long as they’re conjugated accordingly as had to and needed to. Other modal verbs use the present perfect to discuss events in the past.

Can and will use their past tense form plus the infinitive form of the main verb without “to,” just like in the present.

I could do a handstand when I was a kid.

During exam season in college, I would not sleep much.

Again, only can and will can be used in the past continuous. It’s formed just like the present continuous, except with the past form of the modal verb.

I could be working right now.

Instead of using the infinitive form of the main verb, just use the present perfect form, which is “have” plus the past participle. As before, you must always use “have,” even if the subject is third-person.

If you’re using can, be sure to use its past tense form of could.

I might have gone to the party, but I forgot.

The truth is that most of the future tenses already use modal verbs because they use “will.” If you want to use different modal verb, such as “can” or “should,” you can use it normally with the infinitive form of the verb, and without will.

I can hang out tomorrow.

Should I major in law next year?