How to Write a Great Story in 5 Steps 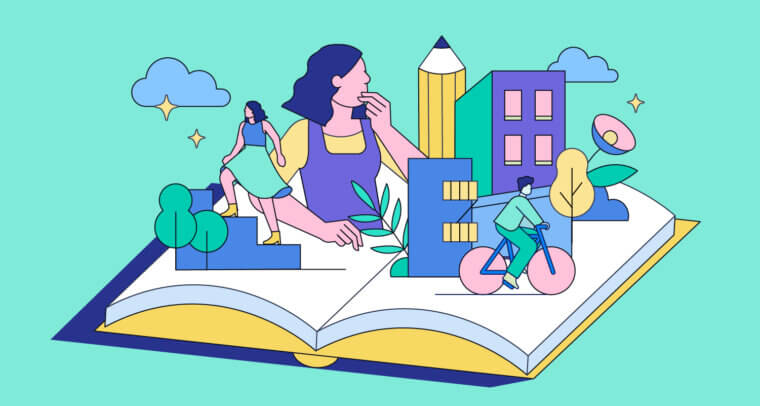 Storytelling comes naturally to human beings. That’s why stories are all around us. When you talk to your friends, you tell stories. When you watch movies and read books, you’re watching and reading stories. When you study history and current events, you’re understanding the world through stories.

Why write a story?

We think a better way to phrase that question is: Why not write a story?

You have stories to tell. And whether you consider yourself a storyteller or not, you already tell them. By learning how to write a story, you can become a stronger communicator and even a better writer in other areas, like academic and professional writing.

What is a story?

A story is, essentially, an account of connected events. These events can be mentioned explicitly or implied. Take a look at this famous six-word story that’s often attributed (incorrectly) to Ernest Hemingway:

There’s a lot you might infer from this sentence. From the story’s scant clues, you might form ideas about who’s offering the shoes, why they were never worn, and why the seller is seeking payment for them rather than passing them along for free. As you make these inferences, you’re putting together a story.

An account of events isn’t always a story, though. To be a story, the following five elements must be present:

In our six-word example above, the reader is tasked with inferring most of these elements from the few words provided, like who the characters are and the conflict that led to the baby shoes being placed for sale. Here’s another example of a piece of flash fiction (that’s only one letter long!):

Who’s the character? The group issuing the cosmic report card. What’s the setting? The cosmos. The plot? Planets receive grades based on their cosmic performance. The conflict? Earth’s failing grade. The theme? Humanity’s unsatisfactory performance.

While the story itself is only one letter long, the title is what really sets up the story and makes it possible for its single letter to communicate the story’s conflict and theme.

The only rule for writing a story is that it contain these five elements. Otherwise, a story can be just about anything you want it to be. It can be as short as just a few words or so long that it spans multiple novels.

Every story is unique, isn’t it?

Every story might have a unique combination of characters, setting, plot, conflict, and theme, but every story can also fit into one of the seven plot types identified by journalist and author Christopher Booker. These plot types are:

These plot types are general outlines—two rags to riches stories can be dramatically different from each other, as can two stories in any other category. For example, Groundhog Day and Pride and Prejudice might have little in common on the surface, but they are both rebirth stories, meaning their plots recount how a flawed character faced an obstacle that forced them to become a better person. Grouping stories into these categories provides a framework for discussing, categorizing, and understanding stories.

As we discussed above, there’s no minimum length for a story. There also isn’t a maximum length. Stories are often categorized by their lengths, though. These are the most commonly used designations:

You might also be familiar with terms like novelette and flash fiction. These are subcategories that refer to stories of specific lengths within these larger categories. A novelette is longer than a short story but shorter than a novella, while flash fiction is a story told in typically fewer than 1,500 words.

Is an anecdote the same as a story?

A short account of events that doesn’t have the five elements that make a story is known as an anecdote. A quick recap of an interaction you had at work and a rundown of your experience at an amusement park are anecdotes.

You probably know the story of “Goldilocks and the Three Bears.” The version you’re familiar with is a narrative told in the third person. Now imagine reading the story told from Mama Bear’s perspective—the narrative might include a passage like the following:

“I followed the small, dirty footprints from the front door to the kitchen, where I found somebody had ransacked the pantry and left crumbs all over.

‘Mama, come quick! Somebody’s in your bed!’ Papa Bear called from the bedroom. My heart pounding, I told Baby Bear to stay in the kitchen. I didn’t know what to expect . . . was this intruder dangerous?”

See how the storyteller’s perspective shapes the narrative? A narrative uses the point of view of the first or third person (and in some cases, second person.)

How to write a story in 5 steps

The story writing process is similar but not identical to the writing process you use for other kinds of writing. With a story, you need to make sure the five elements we listed above are present.

Here’s how to write a short story:

The first step in writing a story is coming up with an idea. If the story is an assignment, you might already have a theme, a conflict, and/or other elements to work with. If not, look for  inspiration. You can find inspiration anywhere—your own experiences, news stories, historical events, even just letting your mind wander down a “what if?” rabbit hole.

Watch. Listen. Observe. Take notes. Make a habit of doing all these things, and like writers throughout history, you will find inspiration all around you.

Once you have an idea for a story, brainstorm. Jot down all the ideas you have, including a rough outline of how the plot will progress. Let yourself play with ideas for characters, settings, plot points, and how the characters will resolve the main conflict (or not!).

With the basic points down, decide on the point of view you’ll use. This is where the idea of narrative comes into play—who is telling the story, and how does that character’s experience and perspective direct the narrative?

Next, create an outline for your story. A story outline is similar to outlines used for other kinds of writing, like academic papers. Your outline is a basic framework for your story that lists its key plot points and relevant details. For a lot of writers, a story’s outline is helpful in mapping out the scenes that make up the story.

It’s time to write. Sit down and resist the urge to edit your story as you go along—just get all that story writing out of your system. You’ll have plenty of time to edit later.

5 Revise and edit your story

At this stage, it can be helpful to have others read your work. If you belong to a writing group, bring your story to them for constructive feedback. Readers are often better at catching plot holes, mischaracterizations, passages that can be strengthened, and other aspects that just aren’t working than the story’s author because they’re approaching it with fresh eyes.

If you don’t belong to a writing group, ask a few close friends or loved ones to read your work. We know it’s an intimidating ask . . . but if you want to write stories for anybody other than yourself to read, getting reader feedback is crucial!

With reader feedback, you can revise your story. This revised version is your second draft. At this stage, it might be ready to publish, but don’t forget that proofreading and checking your spelling and punctuation are important parts of the editing process. It can also be helpful to ask your readers to give it another read-through and provide any additional feedback they have on the second draft.

The Tortoise and the Hare, an allegory attributed to Greek storyteller Aesop, is one of many stories from the ancient world that have stood the test of time. Its theme is steady progress beats speed when one is pursuing a goal.

Another famous story is The Thousand and One Nights. This is a collection of stories within a larger story, similar to The Canterbury Tales and The Decameron. The main plot of The Thousand and One Nights is the story of Scheherazade, a young woman who marries the king, delaying her execution by telling him a new story every night. Eager to hear the story’s end, he delays the execution over and over, for a total of 1,001 evenings. This kind of story is called a frame story, as multiple shorter stories fit into a larger framework.

Frankenstein (its official title is Frankenstein: or, The Modern Prometheus) is a well-known story by Mary Shelley published in 1818. The story, which has been republished and reimagined countless times since its initial release, explores themes of life and death and the conflict of humans vs. nature.

What is a story?

A story is an account of events that includes a setting, theme, plot, conflict, and at least one character.

How does a story work?

A story communicates a theme by telling the reader about a series of events, also known as a narrative. Within the narrative, a character faces at least one conflict, which often (but doesn’t always) change the character.

What are the different types of stories?

There are many different kinds of stories. The seven basic plot types are:

Writing TipsWhat Is Satire in Writing?

Writing TipsHow to Write an Outline in 5 Steps

Writing TipsThere vs. Their vs. They’re: What’s the Difference?

Writing TipsHow to Write a Monologue in 7 Steps

Writing TipsWhat Is Logos? History, Definition, and Examples
Writing, grammar, and communication tips for your inbox.