You Better Watch Out: Christmas Carols Aren’t as Grammatically Correct as You Might Think 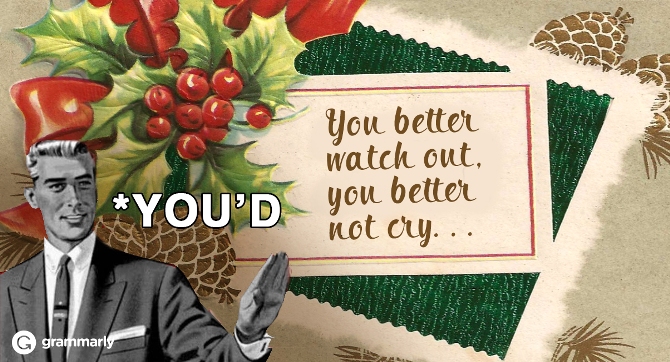 To hear some people tell it, one of the great hallmarks of the holiday season is singing carols–think Jingle Bell Rock, Silent Night, and Rudolph The Red-Nosed Reindeer. But interestingly, many carolers don’t actually stop to consider the words of these popular holiday songs.

Commonly misunderstood song lyrics can be hilarious or downright confusing–so as word nerds, the Grammarly team decided to take a closer look.

All is calm, all is bright

Round yon virgin, mother and child

Holy infant, so tender and mild

“Silent Night” is one of the most popular carols of all time, but many carolers are puzzled by the phrase, “round yon virgin.”  In this case, the lyrics are pretty self-explanatory: “round” in the song just means “around.” “Yon” is a shortened word for “yonder,” meaning “over there.” The lyrics simply state that calm and bright feelings surround the virgin mother and her child.

–Santa Claus Is Coming To Town

“Santa Claus Is Coming to Town” is one of my favorite Christmas songs. Although the song warns listeners, “you better watch out,” grammatically speaking, it should really read, “you’d better watch out.” “You’d” means “you had,” which makes a lot more sense than saying “you better.”

It might be hard to imagine what it really means to “troll … [a] carol,” but apparently this is a great way to get into the Christmas spirit. The sixteenth century definition of “troll” means to “sing in a full, rolling voice; to chant merrily or jovially,” and isn’t that what we are all supposed to do during the holiday season? Some carolers change the word from “troll” to “toll,” thinking that a troll is a little fella found under a dark bridge.

–It’s the Most Wonderful Time of the Year

“It’s the Most Wonderful Time of the Year” uses a lot of made-up words and phrases, including “jingle belling” and “mistletoeing.” Maybe it is true that song lyrics roll off the tongue more fluidly when they rhyme. Accordingly, songwriters may make up words for effect. In this song, we benefit from changing nouns into verbs, for example.