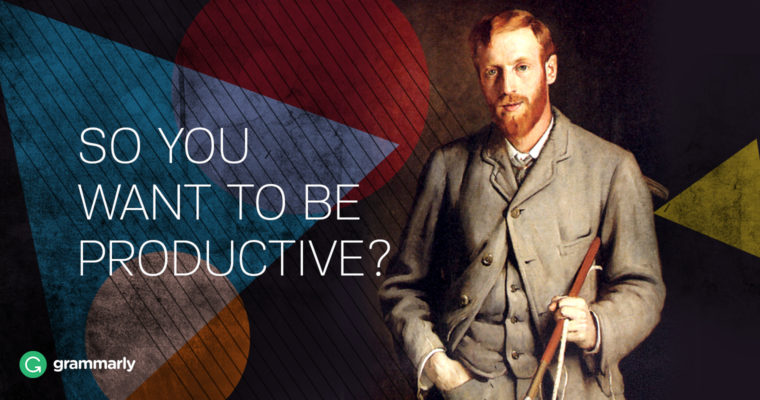 A number of poor practices might be nipping away at your business’s productivity—without you even realizing it.

In a recent Harvard Business Review article, poor writing was cited as a major productivity killer. But bad writing isn’t the only thing that can sink your employees’ productivity. Among a bevy of other potential reasons, experts have cited inflexible workplace practices, long hours, sterile office environments, and even emails.

But don’t worry—all these issues can be mitigated with a little knowledge and effort. In this article, I’ll show you how you can boost productivity at all levels of your business by

These might sound like abstract, pie-in-the-sky concepts. But you can turn them into concrete realities (and improve your company’s productivity in the process) by adopting the following strategies.

Sometimes it seems like your colleagues are having one big competition to see who can write the most tortuous email possible, right?

If you’ve ever felt that way, you’re definitely not alone. According to a survey of 547 business people, 81 percent of respondents agreed that poorly written material wastes time, with a majority calling much of what they read “too long, poorly organized, unclear, filled with jargon, and imprecise.”

To remedy labyrinthine writing, you should train employees at all levels to write clearly and get straight to the point. Lengthy introductions may work well in college, but in the workplace, brief trumps flowery. Emphasize the importance of short sentences and strong, active-voice language.

There’s another simple way to minimize the number of convoluted emails passing through your organization:

Eliminate the entire idea of using emails for intra-office communication.

Yes, this might sound crazy. But new communication technologies have introduced more productive venues for communication.

For example, businesses report an average productivity increase of 32 percent after switching to the real-time messaging app Slack. And it’s not just startups and small teams who use Slack. Major organizations like Harvard University, eBay, and Ticketmaster have all adopted the tool. Used judiciously, the platform can boost your productivity with shorter, more immediate communication between team members.

Just be prepared for some growing pains as staffers adjust to these new methods.

Nine-to-five: It’s ingrained in our collective consciousness. We arrive at the office at 9 a.m., we leave at 5 p.m., and that’s that.

Or maybe not. An increasing body of research suggests that the tried-and-true nine-to-five might not be the most effective schedule when it comes to productivity. Instead, flextime, where workers are free to telecommute and choose from a range of working hours, is growing in popularity.

There’s evidence to support the benefits of switching to flexible hours. Researchers have found that flexible schedules accounted for up to 10 percent more productivity in the pharmaceutical industry, and similar productivity boosts have also been noticed with computer programmers. And with 77 percent of millennials believing that flextime makes them more productive, flextime is likely the way of the future as workplace demographics shift.

So, if you want to boost your business’s productivity, consider implementing flexible work schedules. As an added bonus, employees are likely to be happier and less stressed, too.

Have you ever been to a spa that blasted heavy metal music? I’m guessing the answer is no. In fact, that image seems ridiculous because most of us naturally recognize the powerful connection between environment and mood.

It’s no different in the workplace. Bland, minimalist offices can drag down morale and productivity. In the words of some of the psychologists who studied this phenomenon, this type of office is “the most toxic space” for humans to work in.

In a three-country study, those psychologists found that simply adding plants to an office increased employee productivity by up to 15 percent. Other studies suggest that showcasing art or adding more natural light can achieve similar productivity boosts.

Not every office can boast Google’s futuristic egg chairs and room-sized hammocks, but putting effort into improving your office environment (even with something as simple as buying a few plants) will bring real returns for productivity and morale.

If people work longer hours, they should get more done, right?

This way of thinking seems logical, but it’s actually not that simple. Despite the fact that four in ten Americans work over fifty hours per week, longer hours don’t always lead to more productivity.

In fact, research suggests that productivity sharply decreases as overtime hours increase. Because of this phenomenon, there’s actually very little difference in productivity between, say, working fifty-five hours per week and working seventy hours per week.

So, if you want more productive, well-rested employees, try to stick to a forty-hour work week whenever possible. The best way to get employees to maintain these hours is for upper management to model them.

As a general rule, happy, valued employees are more productive than employees who feel stressed, exhausted, and unappreciated. That’s why implementing a comfortable, flexible office environment, combined with clear and efficient communication, will allow most businesses to reap real productivity rewards. Colin Newcomer is a freelance writer with a background in SEO and affiliate marketing. He helps clients grow their web visibility by writing primarily about digital marketing, WordPress, and B2B topics.