What Is Imposter Syndrome, and How Do You Overcome It? 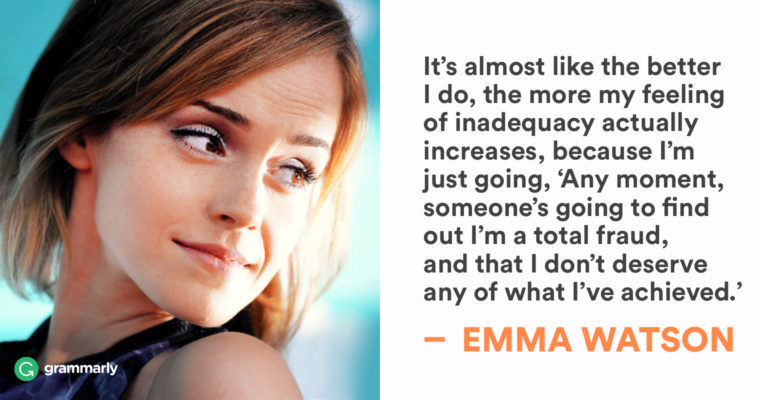 You took this job because you wanted to grow, try different things, and face new challenges. You wanted to expand your skillset—to learn by doing something you’d never done before.

Instead, it feels like you’re flailing. Like a golden retriever wearing a necktie, you have no idea what you’re doing, do you? Given your historic string of gaffes, it’s only a matter of time before someone calls you out for the fraud you are. You can feel it in coworkers’ looks whenever you speak up. They’re thinking: “You’re not even supposed to be here. Please leave so an actual expert can take charge.”

But wait. Maybe what you’re feeling isn’t accurate. What if the sensation that you don’t belong—that sooner or later you’ll be exposed and summarily defrocked—is something that even uber-qualified veterans with decades of experience have to wrestle with? This concept has a name: imposter syndrome, or the imposter phenomenon.

Imposter syndrome is the inability to internalize your successes, coupled with the fear of being outed as an unqualified fraud.

This is worth addressing because it can hinder all kinds of ambitions, from contributing more to meetings, to asking a potential mentor to coffee, to requesting a well-deserved raise. Now that you know its name, let’s look at ways to combat imposter syndrome.

1 Recognize it’s not just you.

Those people you worry are sneering at your incompetence? Don’t read too much into it. Chances are good they’ve sometimes had to battle imposter syndrome themselves.

Imposter syndrome has beset such eminent talents as Tina Fey, Emma Watson, and Tom Hanks, who called self-doubt “a high-wire act that we all walk.”

Novelist and YouTube star John Green put it this way:

I feel like a fraud all the time, and I still don’t feel like I know how to write a novel, and at this point I doubt I ever will. The only way through it for me is to take pleasure in the process of writing, or to find value in it. Even when I suck.

As Green notes, it can also prove helpful to lose yourself in your work, when possible.

Writer Neil Gaiman says one formative revelation in dealing with imposter syndrome came upon meeting a fellow Neil who—no big deal—happened to walk on the moon:

Because if Neil Armstrong felt like an imposter, maybe everyone did. Maybe there weren’t any grown-ups, only people who had worked hard and also got lucky and were slightly out of their depth, all of us doing the best job we could, which is all we can really hope for.

Unlatching your brain from the feeling you’re somehow inadequate can be tough. Gaiman’s nod to doing your best anyway underscores this next point:

4 Try not to dwell on your failures.

Maybe you expect a lot of yourself. Maybe your field leaves little room for error. The fact remains that you are human, and humans are often imperfect, so occasional mistakes are guaranteed. It’s too easy to discount the many things we get right along the way, but give yourself some credit: You are more than the sum of your errors.

5 Remember that you’re doing challenging work for a reason.

Work in the knowledge economy comes with opportunities to experiment—to try out creative approaches. As a result, people are constantly exploring new aspects of their job as they go. That doesn’t mean they’re frauds so much as that they’re ambitious and hungry to stretch their abilities.

Part of innovation is accepting the occasional failure, and if you’re not innovating you’re standing still—or being left behind. Feeling like you’re in over your head might just mean what you’re working on is worthwhile.

Having a colleague or mentor with whom you’re able to hash out these feelings of fraudulence can be invaluable—particularly if it’s someone who’s been through or is going through similar experiences. Getting the perspective of someone whose work you respect—hearing them tell you they’ve sometimes felt like it’s all a ruse, too—has a lot of power to put your own uncertainties at ease.

Reminding yourself that you’re not an imposter can be as simple as writing out your evidence for why—taking inventory of your actual accomplishments and qualifications. What experts term “writing therapy” may in practice look a lot like updating your resume or CV. Doing this might just remind you of all it took to get where you are—and that you weren’t just lucky or faking it along the way.

8 Avoid comparing yourself against others.

There may always be someone working harder than you, staying later at the office, scooping up more acclaim, or hustling for a bigger raise. Then again, those people may also be miserable.

The point is this: while it’s a good idea to try and learn from and possibly collaborate with such people, it’s impossible to become them. Instead, strive to be the best version of your own self. Notice when what you do works and think about why. When your efforts draw praise, try to earnestly hear it.

What makes your own work great may well be unique—something no one else on your team is capable of delivering. That’s something you need to be true to, and not bury beneath anyone else’s imposter act.

9 Don’t be shy about getting help with it.

In rough cases, imposter syndrome can come with anxiety or depression. If that’s messing up your daily life or your work, it might be worth discussing with a counselor. Your happiness, professional satisfaction, and sense of belonging are worth it.

Lifestyle20 Women Who Paved the Way in Writing

Writing14 Conversational Skills You Can Easily Learn and Apply at Work

Writing10 Simple Ways to Change Up Your Writing Routine

WritingIf You Want to Write a Great Speech, Here's How to Do It

Grammar10 Grammatical Errors That Damage Credibility and How to Fix Them
Writing, grammar, and communication tips for your inbox.