You Need a Break: How to Ease Into a Productive 2018 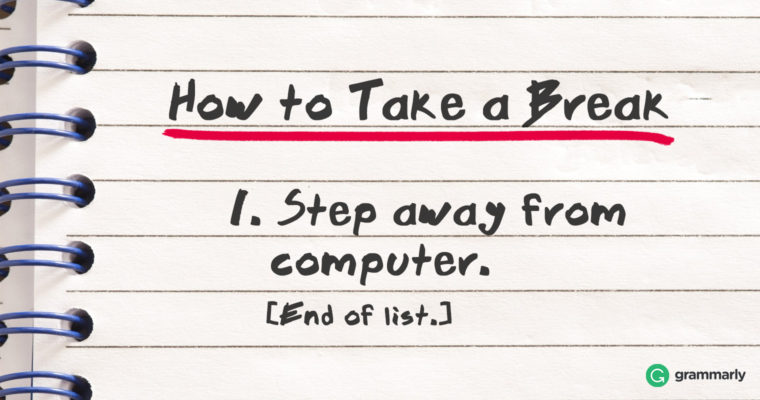 A caricature exists in the minds of many writers of what the daily slog is supposed to look like: a single-minded wraith chained for endless hours to the writing desk, guzzling coffee around the clock while pounding out stacks of immaculate copy.

Writers of such relentless focus are rare. For the rest of us—newcomers and veterans alike—it’s just not realistic to emulate the discipline of the pre-computer-and-copier-age author depicted in Anthony Marra’s A Constellation of Vital Phenomena:

Like poor Khassan, you need a break. Even writers who have survived hundreds of brutal deadlines sometimes have to stop, take a deep breath, and press the refresh button on their brains. Here are a few thoughts from industry professionals on how you can take care of yourself.

Besides his longtime role editing The New Yorker, David Remnick has a reputation as the kind of writer who can crank out a thousand words of scintillating and timely prose in a matter of minutes. (False, he hearteningly tells an interviewer.)

Like anyone else, Remnick says that while working each night in the office of his apartment, he regularly pauses to watch videos online, noodle on a nearby musical instrument, or both:

I take breaks by picking up guitar for ten minutes, or going on—this is very embarrassing to admit, but—going on YouTube, and some kid from Norway teaches you how to play “The Girl From Ipanema” or the solo in “Whole Lotta Love.” That’s very sad, isn’t it?

Not at all, David—not at all.

Indeed, even authors like the singular J.K. Rowling occasionally surface from their work to peruse social media:

Having a break. I’ve been writing since 5.55am! https://t.co/X3brusFxYd

As to working difficult hours, it should be noted that Rowling’s views on writing early in the morning also involve staying in bed: “There’s really no need for formal attire,” she remarks. Which brings us to our next point:

Be kind to yourself

You also have to find a way to clear your head once in a while. Joyce Carol Oates famously wrote that, at least for her, it’s running:

The structural problems I set for myself in writing, in a long, snarled, frustrating and sometimes despairing morning of work, for instance, I can usually unsnarl by running in the afternoon.

For some writers, the ideal outlet is yoga. For others, it might be volunteering to squish some eager pups at an animal shelter. You do you.

Be selective about which distractions you let in, and when

Trying to work while feeling barraged by calls, texts, and social media is no way to get any decent writing done—or to feel like a sane person at all, for that matter.

In other words, while you certainly don’t have to be a machine singularly focused at all times on your work, you’re also allowed to occasionally flick your phone into airplane mode. (In fact, such prominent voices as Sherman Alexie and Lindy West recently decided to bail on Twitter altogether.)

It’s also wise not to stress about what other people are working on. For instance, Nathan Deuel teaches writing and has an assortment of clips most people could only dream of, including The New York Times Magazine, GQ, and Harper’s, as well as his memoir, an Amazon Best Book of the Month. All the same, Deuel jokes about feeling slightly overshadowed at the end of the day when his wife, the illustrious journalist Kelly McEvers, comes home from hosting NPR’s All Things Considered:

You talked to millions of people today? Cool. I wrote an essay about my feelings https://t.co/KkNrcKpIEf

You’re allowed to take some time away

You’ve heard the hard-nosed curmudgeons insist that the day isn’t done until they’ve stacked ten finished pages of prose on the writing desk. Stephen King famously decreed that this rule is ironclad, extending even to his birthday and major holidays. But the reality is, if you’re trying to be good to yourself, you might just need some time away once in a while.

Consider Colson Whitehead—certainly no slouch. Over the last two decades, he’s published six novels and two books of nonfiction, and also happened to take home a $500,000 MacArthur “genius grant.” All the same, Whitehead argues you don’t have to write every single day in order to finish your book. With the beginning and ending already in mind and an outline for the rest, Whitehead’s goal is a modest eight pages a week.

Still, if you’ve imposed ambitious goals and aggressive timeframes on yourself, you may just have to make peace with the prospect of occasionally failing in such endeavors, and learn to forgive yourself. So writes best-selling author Elizabeth Gilbert:

It’s okay—maybe even inevitable, as a writer—to sometimes stumble or even fall, so long as you get back up. Just remember, at Grammarly, we’re always here to dust you off.