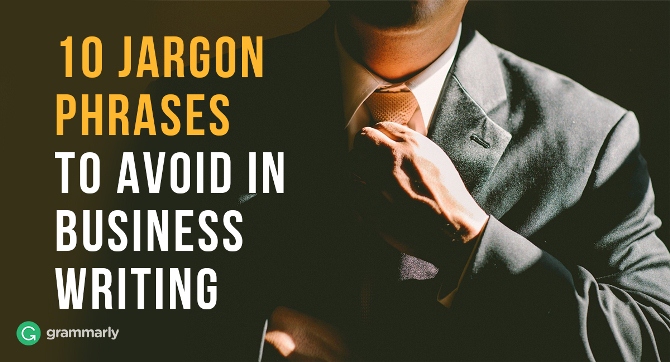 Business-speak. The fact that the jargon of the business world is often annoying is the least of its problems. If there’s one trait business writing needs to have, it’s clarity—which is the trait most business jargon phrases completely lack. They’re neither precise nor informative. They’re not even professional. They’re just vague, even though some of them sound awesome and trendy. But we writers should know better than to use the following phrases in business writing.

Paradigms are widely accepted models of how certain things are. Flat Earth was a paradigm. When paradigms shift, the consequences are substantial—on the scale of humans accepting that the heavens do not revolve around us. The introduction of quantum mechanics was a paradigm shift. So unless a business produces changes on par with these, we should avoid using the phrase “paradigm shift,” and use “major change” or “significant change” instead.

“Moving forward” is a phrase used when we want to end one part of a conversation and go to the next one. It might also be used when we want to say that the business needs to begin the next phase of a development plan. But in that case, it’s better to skip this empty phrase and just say what “moving forward” actually entails. If we want to use it to advance the conversation or to move to the next point in a business letter, there are much better ways of doing it. “On a related matter” is a phrase that is sometimes used, although it has to be followed by a matter that’s actually related to the previous subject. “Regarding” might be used, and it should also be followed by an explanation. Or you might forgo the use of advancing phrases altogether.

To some people, rock stars are individuals who stand on stages, towering over masses of people who soak up every word they sing or note they play. To others, they are people from the past who have lived a wild lifestyle and sadly left us too early. Is it a sound long-term business strategy to hire the latter? It’s not, so it’s more likely that people who write things like “Looking for a ROCKSTAR content writer” in their job posts are actually looking for a person with a good reputation, relevant experience, and exceptional skills. So why not just say so?

Oh, the mysterious next level. The prospect of reaching the next level is what keeps us glued to video games. In business, however, mysteries aren’t so fun. What exactly is the next level? What are the requirements for getting there? And why should we bother? These things are usually known only by the person uttering the phrase. So it should be avoided in business writing. Instead, when talking about change, try to describe the goal, the methods and means of achieving it, and the reasons it’s needed.

This phrase is often used in a very specific kind of business writing—job applications. Résumés and CVs alike often list “results-oriented” as a personal trait, and that’s not good. It means that either you are prepared to do whatever it takes to achieve specific results, or you expect to perform actions which cause results. If the former is true, you should think long and hard about whether you really want to say that or not. If so, you’d better understand what “whatever it takes” means. If the latter is true, you should know that the whole point of performing actions is for them to cause results, and they usually do because that’s one of the fundamental laws of physics. It might be better to say that you’re hardworking and dedicated to achieving great results.

The only way you could give 110 percent of yourself on a project is if there were two of you, and you could borrow the 10 percent from the other you. Or the other you could borrow it from you—it works both ways because you’re both you. This is a phrase that was borrowed from sports, which happens a lot in American business-speak. But even in sports, it didn’t make much sense in the first place. Instead of using it, you can say “do your best” or “invest significant effort.”

Planning and preparation should happen before we take a course of action, so saying that something needs to be pre-planned or pre-prepared is redundant and silly. When you need to emphasize the need for careful and timely planning, it might be better to simply state that timeliness and care are needed.

Think Outside the Box

The popularity of the verb “to synergize” in business circles is probably due to its use in Stephen Covey’s “The Seven Habits of Highly Effective People,” a very influential book among the business-minded. Synergize sounds exotic and powerful, and it’s a great practice to adopt at the workplace because it involves cooperation. But in business writing, using the verb “to cooperate” instead of “to synergize” will make the writing much clearer.

“A perfect storm,” when used in business-speak, denotes the simultaneous occurrence of many unusual and unfavorable circumstances, usually with an undesirable effect. It should be followed by an explanation of those circumstances, and in that case, the phrase becomes redundant. Plus, the phrase is dramatic and there’s rarely a need for that in business writing, so it might be best to steer clear of it.